Sheep STUCK in a rope swing

ANIMAL lovers reacted with fury after a video of a sheep stuck in a tyre swing went viral.

Footage shows the ewe with its head and body stuck in the rope swing desperately trying to get out.

But every time it tries to run away, the animal is lifted into the air before jerking back down to earth.

The footage was filmed in the UK although its origin is unknown. The original poster says ‘Oh dear, that’s funny’ and breaks into laughter as he surveys the sheep’s predicament.

But the film has already irked animal rights campaigners who say that the person who spotted it should have immediately worked to free the farm animal instead of filming it.

Eunice Ann Green said on Facebook: “Why is this funny it’s obvious the animal is distressed - cruel.”

The video was also posted to chat site reddit yesterday.

One viewer said: “I would like to think it’s having fun, but I’m sure it’s trying to get out.”

TripleJJ3 said “This looks like a Shaun the sheep episode.”

Quizzlys asked: “Do you think the sheep climbed in there on purpose”

And Sue Thornton added: “I’m a farmer’s daughter, I don’t eat lamb and I still feel sorry for it. And I’ve ‘lightened up.”

Others said it was just a joke, with Louise Smith saying: “Anyone thought that the sheep did this on purpose. Maybe it fancied a little swing. Weeeeeeeeeeee!”

And Ali Scott added: “Distinct lack of humour on this post. Yes it’s a wee shame but come on, it didn't hurt itself, didn't look all that bothered to be honest, anyone who knows animals would find this funny.” 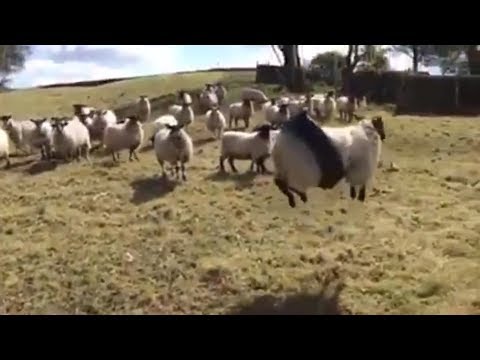 Uniglide hitching up to trailer

A FENDT on 4 caterpillars!

Those dogs are spectacular.﻿