EDIT: I need to clear a few things up for all the naysayers, so PLEASE READ THE DESCRIPTION. We've had a lot of "super truckers" in the comment section who felt the need to criticize us basically for keeping the deceased truck owner's memory alive, and who criticized the truck that was once his livelihood. That seems rather insulting to both him and his widow. Let's set some things straight, for those of you who think we don't know what we were doing when we acquired this truck:

1. This isn't our first rodeo buying a used truck that's been sitting. We knew what we were getting ourselves into. My buddy Ryan ("Bulldog Chaser") bought this truck cheap knowing he was in for a potential project, and isn't afraid to dump some money into it if he has to. Did you really think we were getting a truck in PERFECT condition after sitting for so many years Come on now....
2. Out of respect for Ryan and the lady he purchased the truck from, we will not tell how much he paid for the truck. All you need to know is, he got it for a fraction of what it's worth.
3. We were NOT just dumping starting fluid into the air intake. It only took a couple quick shots of starting fluid before she cranked up. It might look like he was spraying the whole can while it was cranking, but that was NOT the case. He was just holding the can up to the breather in case he needed to spray more in (which he didn't have to). Also, we let it warm up a good 20 minutes before hitting the throttle. You must have missed the jump cuts in the video if you think we were revving it cold.
4. We were NOT worried about a potential runaway when the engine first started. That's a Detroit thing...still possible, but FAR less likely to happen on a Cummins. We had plenty of rags, wood blocks, fire extinguishers, etc. in case the engine WERE to run away.
5. YES, OBVIOUSLY the truck needs a good going-over and a good servicing. Once we get some half-decent weather and get some space freed up in the shop, the truck will get a good thorough cleaning, all the fluids changed, new tires all around, and any other issues will be fixed.
6. Diesel fuel does NOT go "stale" like gasoline does. We were extremely lucky that the old fuel in the tanks was still clean and stable, and had no algae in it. So we weren't afraid to run the truck home on the old fuel - it wasn't going to hurt anything. There are plenty of other YouTube videos of trucks starting and running on diesel fuel much older than what this truck had in it. See for yourself.
7. OBVIOUSLY this truck wasn't suitable to run on the highway. That's not what we were doing with it; we just ran it on back roads that were close to home so we could tow the truck back home if something happened to it. We weren't running it hard either, just babying it to "wake it up". Do you really think we would run it on the highway far from home with worn-out drive tires
8. We had the original plates, title, bill of sale, and two "blocker" trucks running behind this truck for the short 13-mile drive home. Plus we were only driving it on the backroads. So there wouldn't have been any issues if the police or DOT were to stop us.
9. NO, we are NOT restoring this truck, it has way too much character and we plan to keep running it like its deceased owner would have wanted. We may touch up some of the faded areas of the paint, but the truck will NOT be getting a full restore...it's just too nice for that. It WILL be thoroughly cleaned up inside and out.
10. YES, this is an old truck, with an old mechanical diesel engine. Guess what THEY SMOKE! All old mechanical engines smoke at least a little bit. That's just the nature of the beast! I hate to say it, but the EPA outlawed these old engines for that reason! For those of you who think we're killing the environment, I hope you're happy with the modern DPF, DEF, EGR "boat anchor" engines that cause nothing but expensive downtime and headaches for drivers and mechanics these days. I'd like to see one of those new, "clean-running" diesel engines still running as good as this one in 40 years.
11. STOP acting like I hate Cummins because of my few sarcastic comments. I was raised around CAT engines all my life and they are my preference, but I have NOTHING against these old Cummins engines, especially the Big Cam 400. I just like to bust Ryan's chops with CAT vs. Cummins comments every once in a while. It's an inside joke we have going on. Trust me, if CAT and Cummins didn't build good engines, they wouldn't be so popular after all this time, and their old engines wouldn't still be running after 40 years like this one.
12. YES, his shifting was a little bit rough. He hadn't driven a 13-speed in a while, and it didn't help that someone cut a few of the air lines going to the splitter valve so it was trying to act like a 10-speed instead of a 13. Don't act like you've never scratched a gear once or twice in all your years of driving...nobody is perfect. 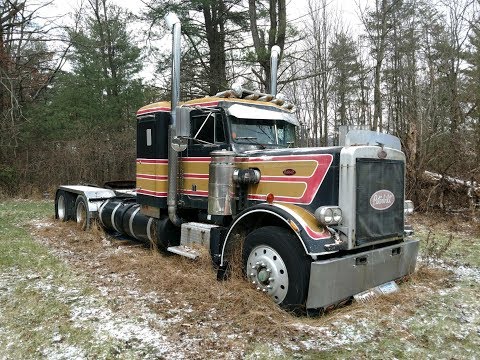 World's third-highest dam to be constructed in Artvin

The Load Handler (How to unload a truck fast and easy)

The Most Amazing Transport Komatsu D475 By Side

Volvo Trucks – How to haul a 150 tonne windmill

Lifted Trucks at the SEMA Cruise 2018.

Dallas getting into the truck

Road Grader out of Plywood