Mega Transports: Mining Truck | Engineering Documentary How can a dump truck too heavy for the roads be transported If a transporter needs to be transported, if 176 wheels aren’t enough to carry its weight and if the load weighs twice as much as the transporter… Then it must be the mother of all mega transports! The setting: Canada. The cargo: an ultra-class dump truck. The heroes: tough men with delicate fingers and eagle eyes. In the midst of the no-man’s-land of Fort McKay, in the province of Alberta, the multi-national company Mammoet has built up a business for special transports. For there is treasure in this region: natural gas. To extract it, heavy machines are necessary. Heavy Machines like the 797. The biggest dump truck Cat has ever built – THE work horse of the North American mining industry. The record-breaking size of its wheels is matched only by that of its price: six to eight million dollars. This is the very truck that Mammoet is supposed to deliver today to its operation site, an oil sands surface mine. Although the mine is only 7 kilometres away, the truck does not manage the short distance on its own power. With the truck’s 300 tons distributed over only four wheels, the road would not be able to withstand the weight. Like an elephant standing on four juice-boxes. The pressure on the four small patches of ground would immediately burst the asphalt. So, it has to be transported on a special trailer, which has to be precisely assembled before the loading can start. And: the transport has to be finished before rush-hour… This mega transport requires everything from man and machine 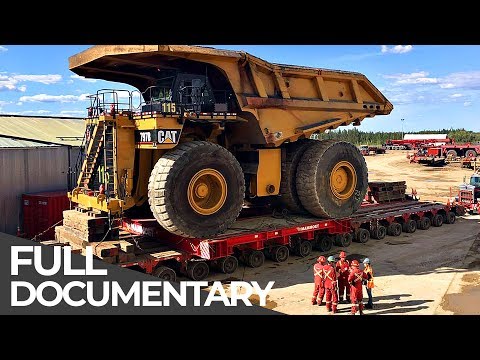 Big Class 9 Combines On The Move

Amazing Skill Felling Cutting Big Tree With Chainsaw You Should Look to See How Big Trees Are Fel...

When push comes to shove