This video was filmed in and around Oslo, Norway in summer 2018.
It shows the new and awesome norwegian roadtrain of Vebostad Transport.

Truckspec: Volvo FH16 750 tandem with a 2 axle semitrailer and a 2 axle dolly from Norslep.
The trailers adjustable drawbar makes this truck able to haul a payload of 38,3 tonnes along most norwegian roads.

The recordings was captured with DJI drone, Gopro and Samsung S8.
The drone video where actually captured inside of the flight restriction zone of OSL airport. After some emails I was able to acquire a flight permit. So a big thanks to the norwegian flight authorities for the smooth handling of this request. 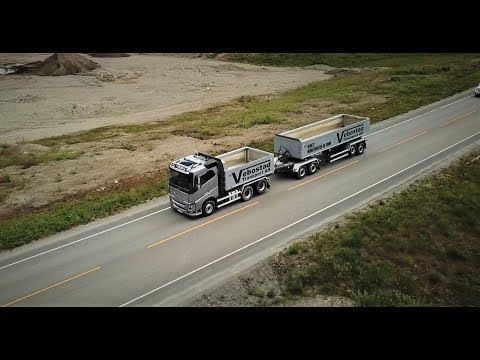 Climbing the SAME slippery mountain with an Hitachi excavator

How to load a tank with a winch

Team of horses pulling a semi truck and trailer. Horsepower! Look at Molly and Prince go!

Longest Truck You've Ever Seen On The Highway

Coolest guy at the boat ramp

Pls Only one Bucket Gravel..