It happened in an instant....a train plowing full-speed into a truck in the Chilean town of Requinoa. Two people were killed - the truck driver and the train driver's assistant.

The train was not carrying passengers at the time.

The cause of the collision is still under investigation, but the surveillance video shows that the truck driver may not have obeyed the signal to stop.

Other drivers familiar with the route say the crossing is extremely dangerous and needs other safety measures.

And it's not the first time an accident of this kind has shocked the town.

A shrine close by recalls a similar incident... and it's hoped that local officials will now take action to prevent a third tragedy. 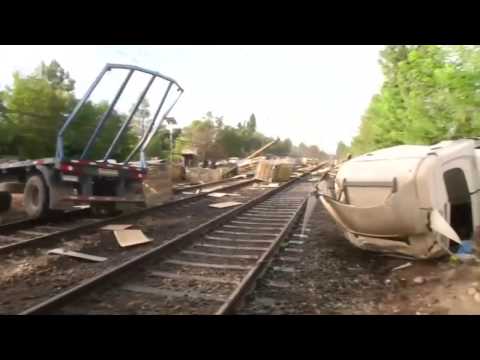 Farmer Lifts Tractor to Save Bird and Nest

Extreme dangers of wheels coming off

7 Most epic transport operations in History

How to Transport a 73,5 meter Windmill Blade

amazing snow removal with the PULL-DOZER 1610

Natural honey bee live in the hole of the tree.