On 11-12-13 i videoed SK Farm's John Deere 9660 cutting beans. These beans are double crop beans planted after winter wheat back in July. This particular section of the field was planted no till with a drill as a test. The beans were short but were yielding pretty well. The beans planted in 36" rows were much taller and thicker. They were strip tilled behind the wheat. Due to timely rains some of their fields were yielding in the mid 60s. All told they had around 1,000 acres of beans this year. I have videos of the wheat harvest and the planting of these beans in my previous videos. In this second part of the video I film just after the unit caught fire. I had just cut off my camera (low battery) and was talking to one of the farm workers when a large fireball came out the top of the combine engine compartment. I told the worker and he took off accross the field in his truck. I turned back on my camera and filmed for a couple minutes as they tried to put out the fire with extinguishers. I thought they has it under control so i packed up and drove to the other side of the field. As i pulled up I realized that it was still on fire and getting larger by the second. After talking with the combine operator it was determined that a hydraulic line ruptured in the engine compartment spraying hydraulic oil on the engine manifold. When the fuel tank finally melted she made one huge fireball. I am sure they are in the process of getting another combine since they still have 400 acres of beans left to harvest. 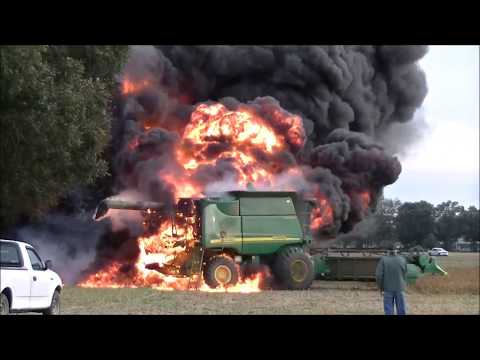 A Goodnature A24 self-resetting rat trap.

Farmer sprays poop all over hippie protestors trespassing on his land

Liebherr Dumper in Not