How to Adjust Tractor Stabilizers

I had a request from a viewer for a video about how to adjust the three point stabilizer bars on a tractor. I'm more than glad to supply that, it's something that you need to do to protect your tires, your tractor three point and your implement.

First we need to discuss what stabilizers do. They're there to keep the implement from swinging from side to side when driving in a field or down the road, and to keep the three point arms away from the tires. On some tractors (the one in the video isn't the best example, but it's lower arms did touch the tire) the three point travel from side-to-side allows the edge of it to contact the tires. When it does you'll hear a pretty loud noise, every time a lug goes around it actually hits the implement and tries to lift it up, then drops it when it gets past the lug. As crazy as it seems, I saw a customer who bought a brand new tractor and failed to adjust his stabilizers and nearly ruined a new set of tires, chewing the inside corners off each lug. How he ran it without figuring out something was wrong I don't know because it had to make a tremendous racket. Surprisingly, the tractor company bought him a new set of rear tires but told us to tell him to NEVER let that happen again, that was the last set of tires they were buying.

Most of the early tractors had either no stabilizers, or a set of chains that limiters the movement of the lower lift arms. The ones with no stabilizers were positioned where they couldn't touch the tires (which limited) the ability to get them wide enough to hook up an implement), the others used chains to limit how far out the arms could go, stopping them before contact with the tires.

Moist of today's tractors have one of two forms of stabilizers. Telescopic stabilizers use a bar with a sleeve around it and holes through both and by putting a pin through a hole you're set and the implement won't go anywhere.

The stabilizers my viewer requested the training on were probably the other stabilizers, which use a turnbuckle to get the implement where you want it, with a jam nut against the turnbuckle to keep everything tight and for vibration to loosening everything up.

It's a little hassle to have to adjust stabilizers even time you hook up an implement but it sure saves on tire wear, and damage to the trisector and/or the implement by it swinging around wildly behind you. 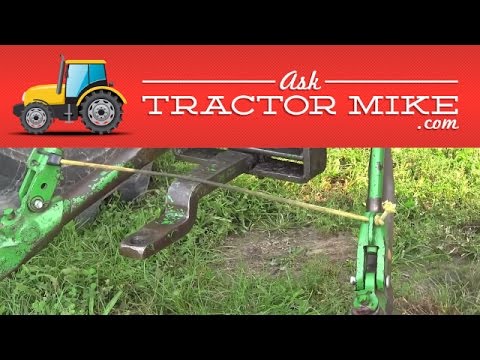 A Goodnature A24 self-resetting rat trap.

100% Track for the transport of soil - Fendt / Benzberg trailer

Self Loading-Self Unloading Round Bale Truck

The Most Powerful Combines in the World in 2019

The bride arrive at the wedding with John Deere tractor in