Bale Direct is a single pass harvest and bale system that connects a large square baler (3'x4', Massey Ferguson 2270XD) directly to your combine. Material is delivered directly from the combine to the baler via a conveyor so the material being baled never touches the ground. The power to drive the baler comes from a hydraulic pump mounted on the combine. Class 8 and larger combines are required. Bale Direct provides an additional revenue stream for farmers while allowing them to harvest without interruption. Bales are produced in a single pass so the farmer saves time and money. In corn, it leaves plenty of nutrient rich stalk on the ground because it only bales what the combine picks up during harvest. 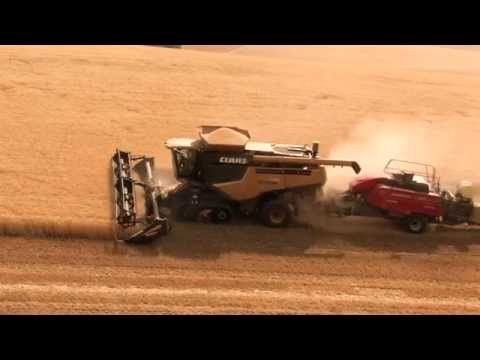 The First Pellet Harvester in The World : Krone PREMOS 5000

TRACTORS That Made the 1980's Great

The Amish Way of Making Hay

That could take a bit to get done !!!

King of the railroad