If you are wondering why the wind turbines failed. About Windmill Failures Nearly 120 wind turbines catch fire each year, according to a research - ten times the number reported by the industry. The researchers claim that out of 200,000 turbines around the world, 117 fires take place annually - far more than what is reported by wind farm companies. Fire has a huge financial impact on the industry; Each wind turbine costs more than £2 million and generates an estimated income of more than £500,000 per year. Any loss or downtime of these valuable assets makes the industry less viable and productive. Fires are a problem for the industry, impacting on energy production, economic output and emitting toxic fumes, this could cast a shadow over the industry’s green credentials. Wind turbines catch fire because highly flammable materials such as hydraulic oil and plastics are in close proximity to machinery and electrical wires. These can ignite a fire if they overheat or are faulty. Lots of oxygen, in the form of high winds, can quickly fan a fire inside a turbine. 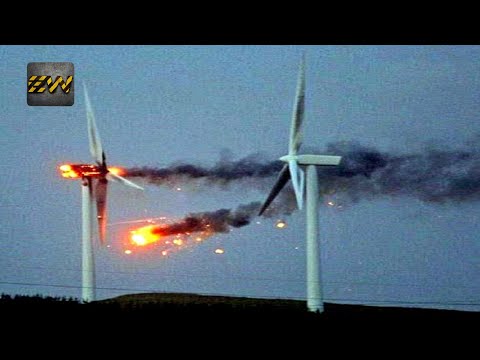 Farmer sprays poop all over hippie protestors trespassing on his land

Starting a tractor by spinning the PTO

HORSCH an operation in Sweden

D9G Pushing In The Pit

Arrival of the world's most powerful forage harvester at SIMA 2019